Society of Radiographers and Agency Staff

It’s strange that the society of radiographers (SOR) has not shown any support towards its membership of agency workers over the current HMRC and NHS improvement plans.

Today I received April’s addition of my society of radiographers magazine, SOR, which is blatantly ignoring the elephant in the room with regards to changes forced on agency workers. I rushed through the pages expecting to see some support for its membership of agency staff. They could help and support agency radiographers in so many aspects of the current changes even by joining forces with the Nurses society. The Nurses society have overturned the current change to employed workers who top up their pay with additional agency shifts.

Employed radiographers and nurses share the same pay bands. If nurses are facing financial hardship radiographers and other allied health professionals will be too. This is probably why the bill for agency staff has escalated over the years.

My theory is that equivalently educated non-clinical staff are better paid than clinical staff. However, clinical staff are caught in a cat and mouse scenario which involves them being seen to be doing a caring role for their own financial gain rather than the need to help others. This was evident in the Junior doctors pay campaign. The JDr’s blamed the shift changes that accompanied their pay cut rather than the pay decrease. Throughout the campaign, they constantly said, “it’s not about the pay” which in my opinion was wrong. It was about the pay and to people on the inside the words “its not about the pay” was a gut churning lie!

The Junior Drs had a chance, a public forum, to highlight the inequality in pay for clinical staff – instead they played politics and protected themselves leaving the rest of us high and dry with little money to live on.

Here’s my example of clinical and non-clinical pay inequality. Look at band 5 and the “Possible roles at band 5” 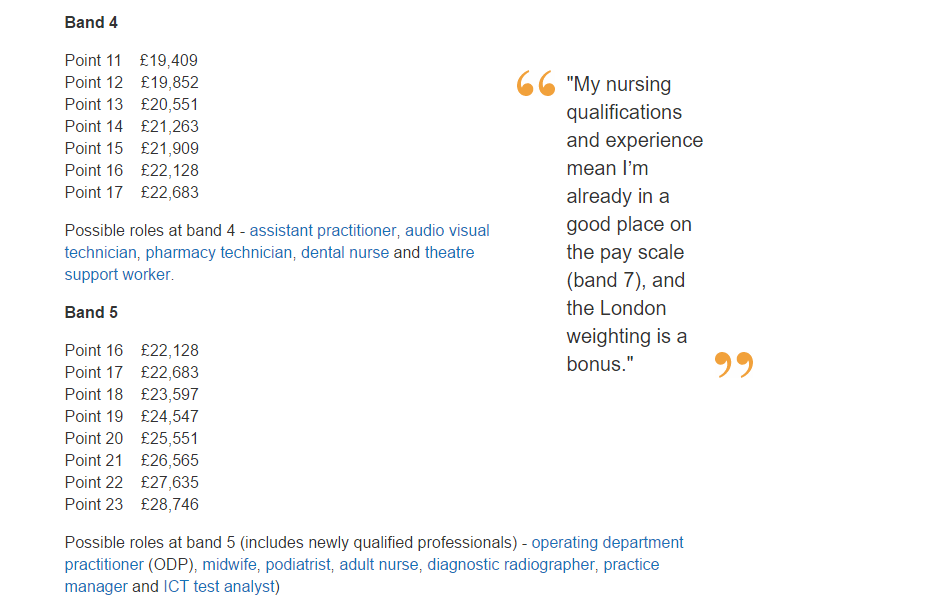 I got this information from the Health Education England website and took a screen shot of their opening statement. The above are pay bands from April 2017.

Then I checked on NHS jobs that the pay bands were as stated on the health careers website. 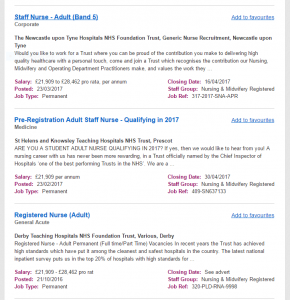 These are current jobs and the searches were carried out on the 03/04/2017. Everything seems correct for Adult nurses. I’m not sure an adult nurse could become a band 7 (reference to the quote in picture above) without taking on considerable responsibility far out weighing the none banded roles of her equivalent senior none clinical employee. 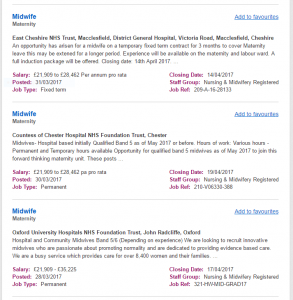 All correct for midwives, they are definitely paid band 5. 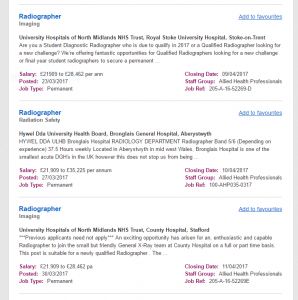 So far so good for radiographers the health careers website is, so far, correct just need to check the non-clinical jobs. 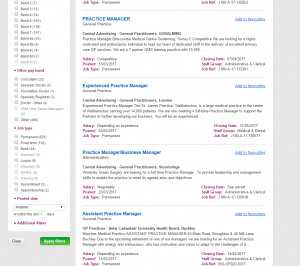 There is no band 5 pay scales mentioned in these comparable non-clinical roles. It’s my belief that job roles like this are the reason the NHS is in trouble financially. Clinical staff take pay cut after pay cut. When I first trained as a mammographer I trained at band 6 and qualified at band 7. As I’ve written in other blogs but now training mammographers are a band 5 and qualified at a band 6. This is a £10K pay cut. The job hasn’t changed nothing has been merged so what justifies the cuts? The NHS breast screening programme has not gotten any smaller in fact it has grown with the recent age extension. It’s not just my field that has had a wage shrinkage its clinical roles across all fields.

It’s shocking to think that after gaining a degree and possibly a post graduate certificate you are working on a par with an employee of Lidl. The responsibility we have and the work we do has far higher risks not only to the patient but ourselves too. Although most of us do this role because we are caring and compassionate – we are also intelligent individuals who could have applied ourselves to any degree course with much success and far greater prospects than what we are experiencing now.

Although we are grateful to the Nurses union for being the only union to throw its weight behind an already stretched workforce – isn’t it time that the unions combined to jointly campaign for professional clinical institutions to stop their membership living in society on the edge of poverty.